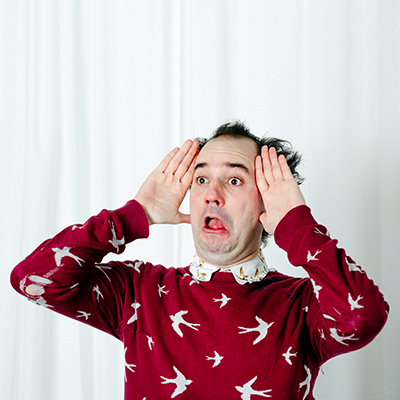 At the start of 2020, I was in a good place, there felt like there was starting to be some genuine momentum behind me, Leicester Comedy festival was fabulous, my new stand up show ‘Millennial Generation Game’ felt like one of the best things I’d ever done,  stand up itself seemed to be going well and felt for the first time in a while that I knew exactly who I was on stage, and I had just been accepted to have my comedy/theatre show ‘Eugene’ on at Pleasance at the Edinburgh fringe presented in partnership with York Theatre Royal (thanks to my fabulous producer/agent Susanna).  Everything was exciting, and although I was nervous about Fringe and taking two shows up, it was all still exciting.

And then the Pandemic struck, and my god I was bored. Everything evaporated, I don’t need to tell you about it, you lived it, but man alive the novelty of waking up, turning on my laptop to check emails (a token gesture) and then playing video games for the rest of the day started to wear thin. Thinking back to it now, it seems like an endless panic holiday, where you can’t quite relax, but there’s also not a huge amount to do. I did do a lot of running though. And was amazing at how hot it was in August – the first one I’ve spent fully in England since 2010.

Arts council England (ACE) started taking submissions again at the end of the Summer. And that’s when things started moving again for me, as much as I am a comedian, a maker of shows, my side hustle (and the one that brings me the dollar) is working with artists and theatre makers on arts council projects, applying for them and managing them.

In many ways applying to ACE is like applying for a gig, hundreds of people competing for that same spot, but instead of sending an email with a cv into the ether and probably not hearing back, it’s very much a case of submitting a business plan and waiting six weeks to hear back if you’re successful. It’s just as much of a rat race as the comedy circuit is, but the money is better, and you get paid to make a show, which doesn’t really happen in comedy.

Anyway I got funding for a second stage of development on Eugene (it had been previously funded by ACE for the initial stage of development) , which by all accounts at this point is a full on theatre show (but has very humorous places), it’s been exciting process. Having conversations with my script editor over zoom, having other people look at the script and tell me it’s not bad, looking at the script for the first time in the year. It’s been a healthy distraction working towards something, being creative, and being proud of what I’m making, that sense of revisiting material and getting excited about your own work again was invaluable after months no creativity whatsoever.

By the time Jan 2021 arrived, I think for a lot of us we’d acclimatised to the pandemic, in our own way, I’ve gotten over my hatred of zoom meetings (almost) and although I’ve not done any online comedy (and have even turned stuff down) I’m happy. In January, I spent two weeks rehearsing Eugene as part of the ACE activity.

I think the oddest thing about that time, is how normal it was, there would be times I’d be driving back from rehearsals forgetting that the pandemic was on, with only the facemask in my pocket as a reminder. In those two weeks I learnt my lines, had meetings with director over zoom (lockdown meant they couldn’t join), lights were sorted, set was made and sorted it was great. But most of all I enjoyed being on a stage and performing. Sure it was only two people in the room (tech team, who were also my housemates), and they were just following the script and necessarily following my facial gestures or when I put impromptu dabs in, but just to do that was amazing, like a breath of fresh air. And the biggest thing, it was so nice to get out of the house. And go to work. By the end of that period, the show was (basically) finished. I had achieved something in lockdown and finished making my show, something that was I was stressing about in Feb 2020 was now finished in Feb 2021.

And now we’re in March, at the time of writing Rishi has just announced the budget, a roadmap is here, and it’s still unclear of Edinburgh Fringe will go ahead (or whether it should), I’m nervous about performing the show (and I guess generally) but also can’t wait to. Hopefully by the end of the year everyone will be able to see what the fruits of my lockdown is – don’t get me wrong there’s a lot I didn’t do in this Pandemic, but I’m grateful to ACE, Susanna and the rest of my team to be able to get Eugene (almost) ready to show everyone, in a less pressured timescale.