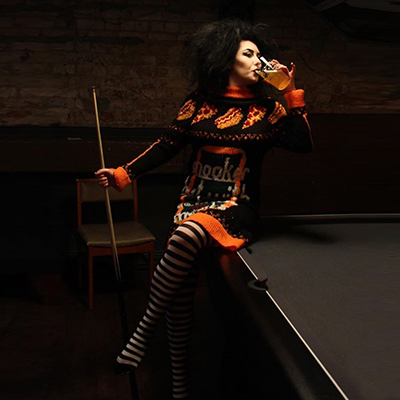 As a comedian, I have embraced this pandemic like two inanimate objects placed near each other but not touching. This isn’t even a social distancing joke, I’ve just not been gelling with it at all, really.

I can’t deny it’s been somewhat thrilling to have an illegal career this last few months.

Not that I’ve been performing, obviously. It’s not out of respect for the law, you must understand, but the simple mathematics that every covid death is not just a person’s unique and fragile life, but an audience member whose loss will be keenly felt when the end-of-show bucket collection returns.

I quit my shitty day-job for this glorious career of stand-up comedy in February 2020, too late to go “No I didn’t mean it!!”, or for my former employer to give me furlough, and too early to claim any benefits as a lowly self-employed person who has totally fucked themselves. Since the bell tolled, I have existed on some arcane mixture of luck, web design, and smatterings of online comedy gigs, both in paying my bills and also keeping me sane.

Performing on Twitch is an odd one. Making jokes to silence was made much better when I realised I was allowed to read the chat and that looking at my phone while ‘on-stage’ wasn’t profane to the extreme. It didn’t help that my first Twitch gig of the pando was part of Mark Watson’s 24-hour Watsonathon at 3am. Doing my usual crowd-pleasing stand-up set to perhaps the most tired man on earth is a uniquely painful gig experience, and I have done a sex-themed set in front of my aunt and uncle (the only audience members) at 10:30am before. Zoom gigs are better, with their instant feedback, and I’ve enjoyed the ones I’ve done. I have found my overall tone is much more conversational. Without the stage and the gig vibes, it’s hard not to feel ridiculous on my usual high horse, delivering witty bits from afar.

In the summer, when I still had a set to remember, and autumn gigs to practice for, the best audience was in my head in the shower. Alone and with the cacophony of running water masking my perfectly delivered punchlines*, I could be killing it with the perfect audience, nudity be damned. Hell yeah. I’m that sure being naked and soaking wet and laughing at my own jokes is something to do with my Inner Child, but that’s something for my therapist to worry about, and this is a comedy blog so it’s fine.

Truly, the best part of this pandemic has been my project with Ingenious Fools- an oasis of R&D into physical theatre, clown, devising, and show-making with powerhouses Natalie Bellingham and Daniel Nicholas. It was like a cloud lifting, which was replaced with a different, cooler cloud made from cotton wool and a halogen bulb. A creative cloud where we had to make stuff and make it gud – n’ boy did we do it. Knowing this project was coming was a lifeline, and now the development phase is over, I have 40 minutes of a show to endlessly tinker over, to write and choreograph and rewrite and to make large, ostentatious props that can be as heavy as I like  because we aren’t going anywhere anytime soon. And working with Susanna has been wonderful all the way through. You would be hard pushed to find a better mix of expertise and understanding with a wicked sense of humour. She’s great and doesn’t even have a gun to me head!!!:D

When gigs start again, I feel all the better for having been with Ingenious Fools this entire time.