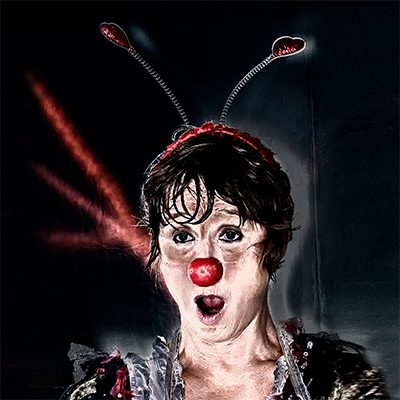 Movement, Nature, The Clown Inside and ‘Zooming out of Lockdown’

Developing my ‘Zoom’ workshops for ‘Ingenious Fools’ has been really inspiring. I have enjoyed the company and support and the chance to share ideas with my fellow artists. The technical support to guide me through Zoom has been a real learning curve and our newly purchased lights, webcam and various leads will set all in a very professional light.

‘Creative Movement for Wellbeing’ is a practice that I have developed in the tiny Welsh village Llanfihangel Glyn Myfyr (where I now live) since  June 2020 in Lockdown. It began on a small patch of land opposite my cottage outside (due to COVID restrictions) and we had four to five participants. July unfortunately was very wet and each Thursday at 2pm even though I was out there and prepared numbers dwindled. I  themed this work to the seasons and began with Summer.

I started again in September and moved the workshop to an indoor space, Nant-Yr-Odyn a space less than a mile along the lane where I live. This class ran until Christmas until we had to ‘LOCKDOWN’ again. Myself and the group are itching to work together again .We hope to later in the Spring …

As a result of this work I was invited to run a series of the same workshops at Ruthin Craft Centre in October. These workshops were filmed by www.stephenheaton.com and drew themes  from ‘EGNI’: ‘a decade of creativity’ by Welsh Artist Eleri Mills. They were available digitally for a group of Carers from NEWCIS. The workshops were very well received and  they then went out publicly via Ruthin Craft Centre’s website. I am now about to film another set of workshops with Stephen Heaton, this time outside on Anglesey as currently we are unable to film in the gallery space. These workshops respond to ‘Tidal Echoes’ a Ceramic exhibition by Artist Beverley Bell-Hughes and the natural seascape of Anglesey.

This is how my creative movement for wellbeing workshops have evolved for “Ingenious Fools’.They celebrate our connection with nature. I have called them ‘Into The Garden’ and ‘The Sea & Me’. I hope to inspire participants to connect with their own local outdoor spaces and think about their ‘moving’ in relation to natural landscapes with the aim of feeling more relaxed, grounded and inspired.

‘The Clown Inside’ consists of two consecutive workshops in which we have fun in “Play” and then translate this playful spirit into finding our own natural simple theatre Clown. The Finale of which I hope will be wearing  the sacred red Clown nose and looking at a series of simple entrances on camera. We will have to see. It was great to share some of these ideas with Angela de Castro and take on board the advice she gave me. This is new and exciting work because I haven’t ever taught any workshops via Zoom before and am glad to have the opportunity to hone my creative practice to do so. Hopefully soon we will all be able to get back to our live work and maybe my last piece of Clown performance work “Grace” or (“GRÂS” in welsh) which was all ready to go at the end of March 2020 will be able to go out live again.