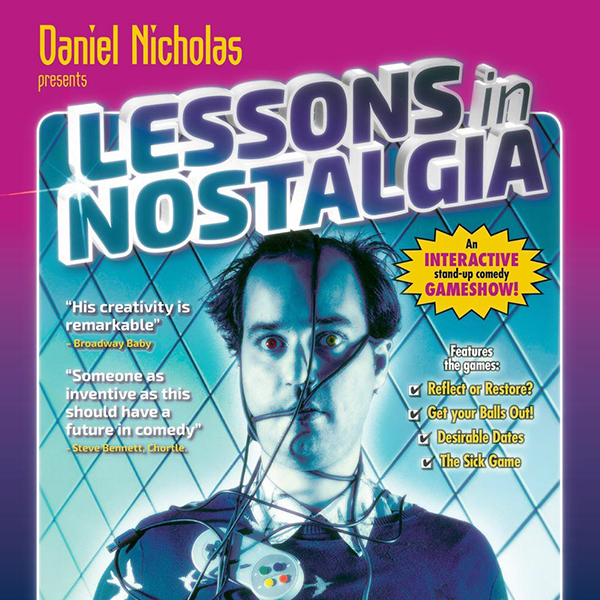 If you remember MSN and video game soundtracks from the 90s, then you won’t forget this show (round of applause everyone for that filthy tag line). With the country (nay, the world?) more than ever feeling nostalgic for “the good old days”, Daniel Nicholas, the ‘Prince of Peculiar’ (GreatCentral.co.uk), takes you on a journey to work out whether nostalgia is actually a good thing. Expect gags, audience participation and something that you’ll never see before, or maybe again.

Featuring a host of inventive and silly games including ‘Reflect or Restore?’, ‘Get Your Balls Out’, ‘Desirable Dates’, and also a game everyone has to pretend to be sick and gets fed Jaffa Cakes.

This year he has teamed up with global toy company Bandai for the Edinburgh Fringe Tamagotchi Challenge, where ten pets will be released into the Fringe. Nicholas says “The challenge highlights the importance of looking after yourself and others, taking the time to eat, drink and sleep, just like a Tamagotchi!”

‘His writing displays a sharp, obtuse wit across all his disjointed one-liners…Someone as Inventive as this should have a future in comedy.’ –Steve Bennett, Chortle.

‘Immensely brave use of Pinter-esque silences…a dangerous comedian who keeps you on the edge of your seat waiting for the next outrageous non sequitur.’ –The Western Gazette

‘A very talented man who can craft a story with ease and grace.’ – Bunbury Magazine