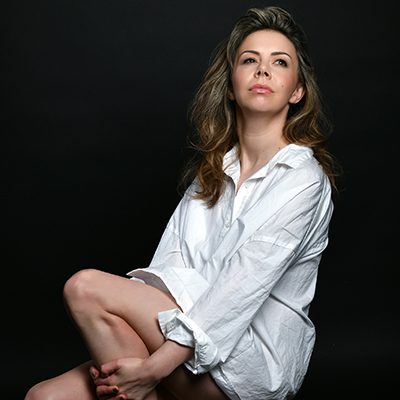 A comedian, writer and award-nominated actor, Georgie has appeared on BackChat (Dave), Quote Unquote (BBC Radio 4), Good Week/Bad Week (BBC Radio 5 Live) and the BBC Radio 4 drama Jayne Lake. She is also a regular presenter on RNIB Connect Radio and was recently published in the Metro writing about her experience of sight loss.

Georgie took her debut, critically acclaimed comedy show, A Poke in the Eye, to Edinburgh Fringe in 2016 which transferred to the Soho Theatre. Her most recent show, Eyecon, is available to watch on NextUp Comedy. Georgie is an ambassador for the RSBC and she works closely with the RNIB.

Georgie is a regular on the UK stand up circuit. Known for her own brand of gossipy humour mixed with disabled banter has made her one of the UK’s most exciting acts in comedy at the moment. She has recently performed online for GB’s Sofa Set List, Sunday Roast, Virtually Funny and NextUp.

Georgie is due to appear at the Leicester Comedy Festival in 2022.

“Georgie Morrell burns with fire and light.”-Whats on Stage

“Georgie Morrell has the perfect mix of feistiness and resignation” ★★★★The Reviews Hub.