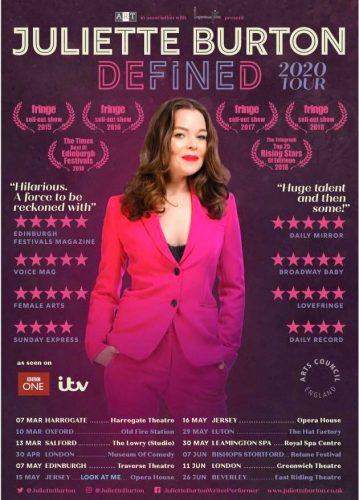 “A FORCE TO BE RECKONED WITH…A MUST-SEE.” ***** Edinburgh Festivals Magazine

Following her hugely successful debut UK tour of Butterfly Effect and an acclaimed season at The Edinburgh Festival Fringe 2019, Award-winning Comedian Juliette Burton will be setting out on tour in 2020 with her ground-breaking new show, Defined.

“INTELLIGENT, EMOTIONAL, LIBERATING.” ***** Voice Magazine
Juliette is full of contradictions: pessimistic optimist, introverted extrovert. Her life has felt like a series of “either/or” binary choices. – Success or failure? Masculine or feminine? Happy or sad? – Why does she have to choose one thing or the other?
After a year of huge change, she’s been forced to redefine herself and her life. Everything she thought was steadfast has vanished. Can she be everything at once? Or must we choose how we are defined?
How would you define yourself?

Juliette Burton is an award-winning performer, writer, presenter and broadcast journalist.
She has previously performed five critically acclaimed total sell-out solo seasons (When I Grow Up, Look At Me, Decision Time, Butterfly Effect and Defined) at the Edinburgh Festival Fringe. Her shows have been seen by audiences around the world and she has performed at some of the best-known Festivals including Leicester Comedy Festival, Adelaide Fringe, Melbourne International Comedy Festival and New Zealand International Comedy Festival. In 2015 Juliette won the Argus Angel Award at Brighton Fringe for Look At Me.

Juliette’s TV and radio credits include The One Show (BBC1), This Morning (ITV), Skin Deep and Feeling Kind of Funny (both BBC Scotland), BBC At Edinburgh Festivals (BBC iPlayer), BBC Tomorrow’s World and Afternoon Edition (BBC Radio 5 Live). She also played the lead role in SuperMum, directed by Lisa Gifford, which premiered at the 2015 Raindance Film Festival. She was also listed by The Telegraph in 2019 as one of the top 10 audiobook narrators alongside Stephen Fry, Emma Thompson and Steve Coogan.

As a writer, Juliette has contributed to The Independent, i Newspaper, Cosmopolitan and BBC News. She is an ambassador for mental health charity ReThink Mental Illness, and supporter of Mind and B-eat, and was a guest on Dave’s Comedians Against Living Miserably podcast.
This will be Juliette’s second UK Tour after successfully reaching out to audiences across the UK on her debut tour with her hit show, Butterfly Effect which was supported by Arts Council England. Her podcast Juliette Burton’s Positive Mental Attitude is available on iTunes and Defined was filmed and broadcast by Next Up Comedy in 2019.