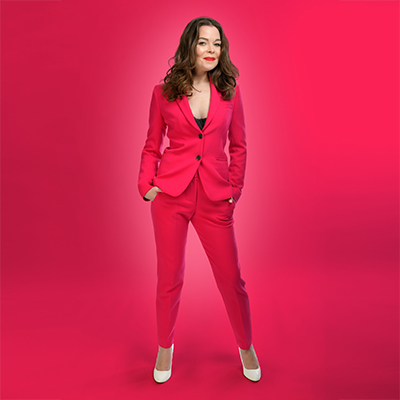 In 2020 she developed virtual shows ReDefined, Happy Hour and Kindness In Quarantine for online audiences which were produced by Ingenious Fools and she was recommended as a provider of lockdown comedy by The Guardian alongside Frankie Boyle and Kiri Pritchard Mclean.

Juliette has a lifelong history of mental health problems. She was diagnosed with OCD, acute anxiety, manic depression, bipolar, anorexia, bulimia, compulsive overeating disorder. She has experienced psychosis and agoraphobia as well as social anxiety disorder. She was an inpatient in mental hospitals/clinics 4 times, and sectioned under the mental health act aged 17.

Juliette is an ambassador for ReThink Mental Illness.

Ingenious Fools has produced a range of Juliette’s tour & outreach projects, including Defined, ReDefined and Hopepunk.

Hopepunk will be appearing at Leicester Comedy Festival and the Edinburgh Fringe in 2022.

“Hilarious… Her charisma, uniqueness and talent make Burton a force to be reckoned with”