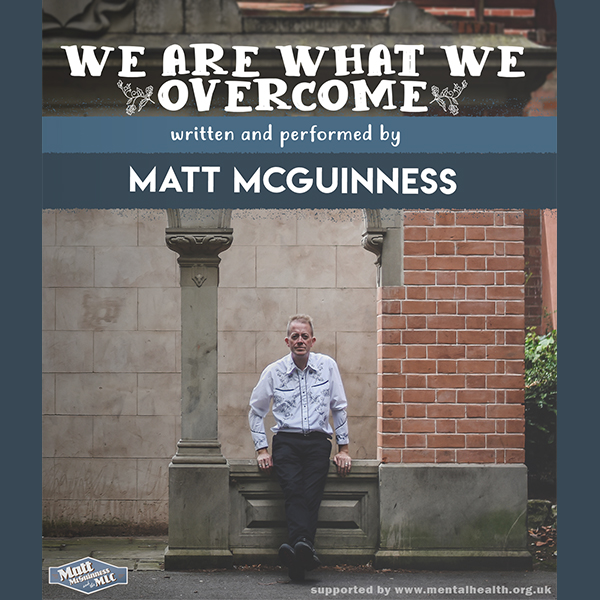 Matt McGuinness – We Are What We Overcome

In April and May 2019 Matt McGuinness toured Theatres, Arts Centres and Fringes around the country and is set to embark on his next tour of the show in Spring 2020.

In the meantime you can listen to the podcast, watch the music video or hear some audience feedback:

The show first began at the Edinburgh Fringe 2018, where McGuinness booked a run of shows because he knew he needed to talk to someone. “Sometimes you’ve got to find your own way of dealing with Mental Health problems and if the Arts and conversation is one way, why not on a stage in front of a room full of strangers.” He returns to the Fringe after developing the show for a year and reflects on his experiences

As the show tackles the subject of mental health, Matt always provides space after the show for discussion and provides materials for local and national mental health organisations.

The show has proudly gained support from Mind, the Samaritans and the Mental Health Foundation. These charities provide the audience with vital information on the points of contact and support available. In each location of the show materials on hand to raise awareness and provide signposting to the incredible support that’s out there.

“At times this show is like a series of small polished TED talks on Mental Health, Parenting, Humanism and Love, but these are punctuated by poetic songs loaded with meaning and metaphor.” Nailed

A successful singer/songwriter and performer, originally from Liverpool, but now living in Derby, Matt performs with his band, the MLC, all over the UK. Current members of the band include Eileen Wright on tenor sax/whistle – a close friend and someone who has played music with him for the last seven years.  Dan Byrne (bass) and Jo May (percussion) have been involved throughout the last two years and the group are close in terms of sound and friendship.

He has written for publications such as Mind Waves on the subject of the power of music in dealing with mental health, and uses his own experiences to reflect on these issues. He has faced his own mental health challenges for a number of years, brought on by various factors including the early death of his mother and bankruptcy ten years ago.

In 2018, the Samaritans reported that male suicide rates were at their lowest for more than thirty years. Samaritan’s CEO Ruth Sutherland believes that “the focus of suicide prevention in recent years to tackle the higher rates in men has contributed to this. Added to this, reducing stigma around men’s mental health and encouraging men to open up and ask for help when they are struggling has been beneficial. But one death by suicide is still one too many”.

It’s not just men who are a concern, our young and elderly people are struggling with a loneliness epidemic, with more people living alone than ever before. David Halpern, British Psychologist and Civil Servant is quoted as saying “If you have got someone who loves you, someone you can talk to if you have got a problem, that is a more powerful predictor of whether you will be alive in 10 years’ time, more than almost any other factor, certainly more than smoking.” (https://www.bbc.co.uk/news/uk-42887932)

What the audience said…

A skilfully put together and performed show with some surprisingly funny moments,  good songs that successfully bind the evening together and illuminate the serious message ….loved the spoons!”.

“An evening of thoughtful, honest conversation and great music. At times raw and emotional, at others, full of humour and uplifting perspective.”

“The band were bang on.”

“Heartfelt thoughts and moving lyrics. An incredible night of enlightenment and entertainment.”